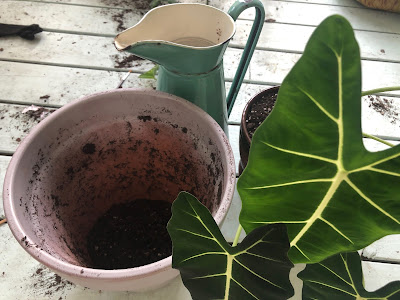 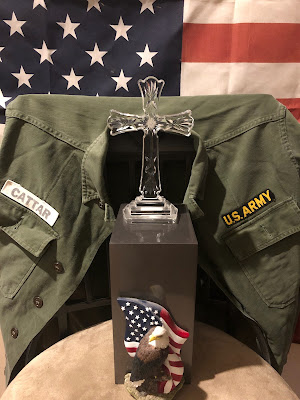 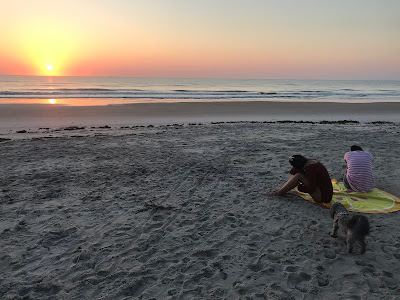 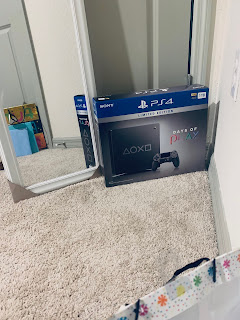 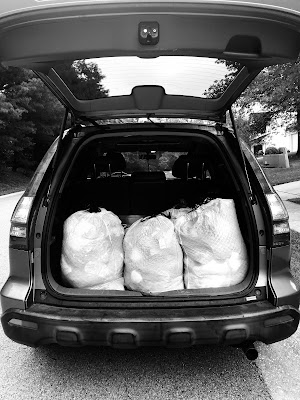 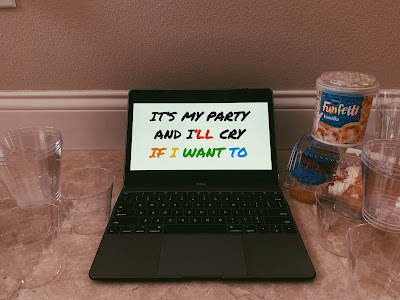 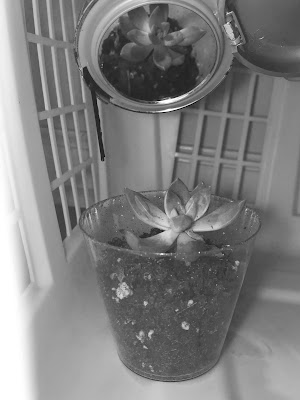 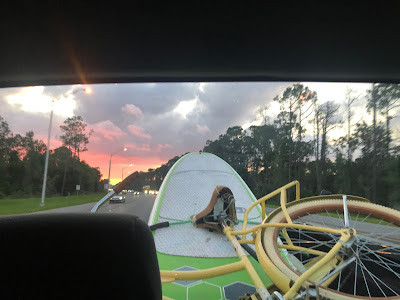 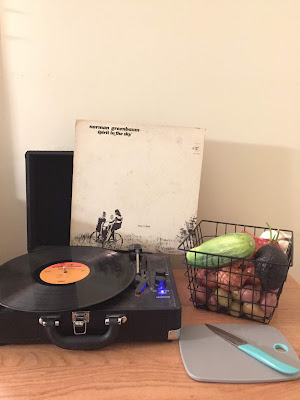 Posted by Laura Mongiovi at 9:47 AM No comments:

The World Before Your Feet 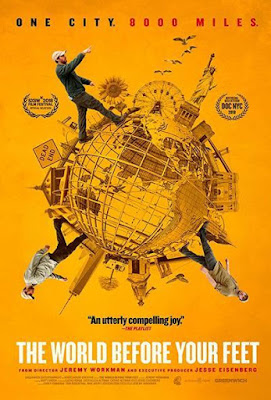 An engaging documentary about one man's quest to walk every block — and park, and bridge, et al. — of New York City’s five boroughs.

An engaging illustration of the difference between merely looking and really seeing, Jeremy Workman’s “The World Before Your Feet” profiles Matt Green, whose current occupation is walking every block (and park, and bridge, etc.) of New York City. It’s a labor of love that’s already consumed years, with no end yet in sight — but then, Green is most definitely an “It’s the journey, not the destination” type. This portrait of one man’s eccentric yet appealing, even enviable quest is a gently philosophical exercise in armchair travel that underlines how much of our own immediate “world” we take for granted.

The thirtysomething Green is a former civil engineer who at some point decided a desk job — or any conventional employment — was not for him, and for whom this isn’t his first such rodeo (in 2010 he walked across the United States, from Rockaway Beach, N.Y., to Rockaway Beach, Ore.). But that coast-to-coast journey took just five months. Green’s subsequent, ongoing task may end up covering three times that 3,000-mile length, despite being limited to New York City’s five boroughs. It’s further elongated by his compulsive research on the history and fascinating trivia behind each tiny slice of the Big Apple — some of which he posts on his walking blog/journal. But he’s running way behind on that, too.

This vocation no doubt conjures images of our protagonist chin-wagging with colorful, gregarious “melting pot” types on the teeming urban streets. And indeed, there’s a certain amount of that, not least because Green is an affable sort always happy to explain his purpose to curious passers-by. But as he pads across the farthest reaches of Governor’s Island, The Bronx, Brooklyn, Queens, Staten Island, et al. in weather both fair and very foul, one is struck by how much open, abandoned and just plain obscure space exists even in the nation’s most densely populated (8.5 million) city.

We also get a wee fraction of the historical errata he digs up, much of which isn’t in the standard guidebooks. There’s the site of the city’s erstwhile Municipal Slave Market (which closed a full century before the Civil War), as well as Malcolm X’s assassination and the first U.S. birth control clinic. Exploration of cemeteries reveals graves for luminaries from Houdini to painter Basquiat and salsa queen Celia Cruz. Toward the end, he tracks down an approximately 400-year-old tree, the region’s oldest, which was “born” before the earliest Dutch settlement laid claim to what would later become New York. 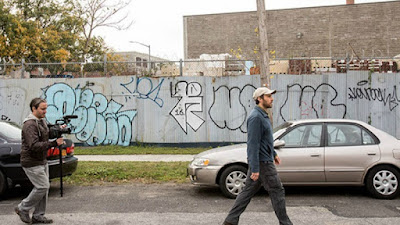 As ingratiating as he is, Green is also something of a blank — less a deep well than an absorbent surface, like many people who obsessively devote themselves to a singular pursuit. He survives on about $15 a day, crashing on friends’ couches or occasionally cat-sitting. The question he most frequently has to fend off is why he does this — no one can believe there isn’t “some kind of revenue stream” as an end-goal, like becoming a paid guide or publishing a book. But such things don’t interest Green, who shrugs “The point of it all … Well, I don’t really know what the point is.” Like the concurrent “Free Solo,” this is a documentary about a protagonist whose devotion to one thing leaves very little room for anything (or anyone) else — as two politely disappointed ex-girlfriends confirm here.

“The World Before Your Feet” fully exploits the geographic, thematic, and human-interest variety of its subject’s grand project, while Workman’s cinematography and editing achieve impressive textural variations in themselves. His assembly echoes the observation that the “random pieces of a puzzle” Green assembles on his endless tour reveal “the parts are greater than the whole.” In other words, a city’s real depth of meaning lies in its accumulated minutiae, not in the surface glitter of imposing monuments, headline-making events, or even the oft-oblivious routine of everyday experience.

While some more skeptical strangers seem to think Green is wasting his time, “World” makes it easy to admire the logic of his explanation that “It’s just about the value of paying attention to something.”

Posted by Laura Mongiovi at 9:20 AM No comments:

Email ThisBlogThis!Share to TwitterShare to FacebookShare to Pinterest
Labels: Documentary, Photo Essay, The World Before Your Feet, Video 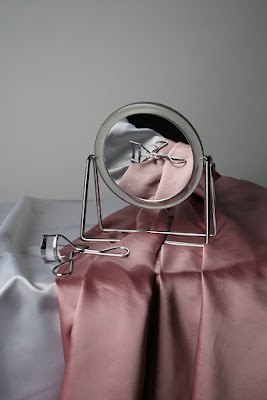 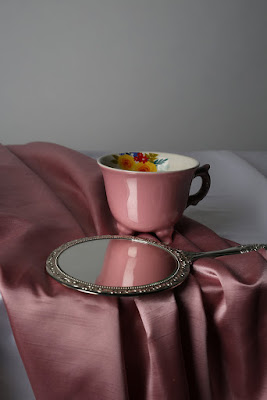 'Self Portraits of My Gendered Objects,' is a series developed during writing my dissertation this year. The photographs are examining my own material culture. The belongings I own display my female gender through colour, texture, and the relation it has to society's expectations of gender roles. The color pink represents the feminine. Each photograph shows my own objects taken from my home and placed in a studio environment. The investigation is to question how femininity is seen in our contemporary society and how it still hasn't changed.

Posted by Laura Mongiovi at 9:15 AM No comments:

Email ThisBlogThis!Share to TwitterShare to FacebookShare to Pinterest
Labels: Self-Portraits

Maier’s massive body of work would come to light when in 2007 her work was discovered at a local thrift auction house on Chicago’s Northwest Side. From there, it would eventually impact the world over and change the life of the man who championed her work and brought it to the public eye, John Maloof.

Our class assignment asks that you do not include yourself (or another person) in your self-portrait. The examples below, although include the artist, can offer inspiration for the class assignment.

I encourage you to learn more about Vivian Maier. Website link below. Also, you can find a documentary on Vivian Maier. Her story offers wonderful insight to how each of us perceive the world around us.

Documentary:
findingvivianmaier.com
Was streaming on Netflix 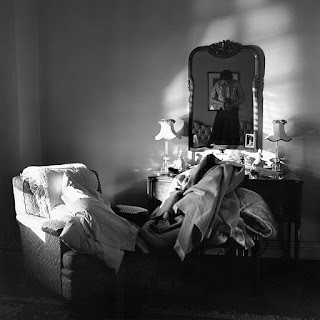 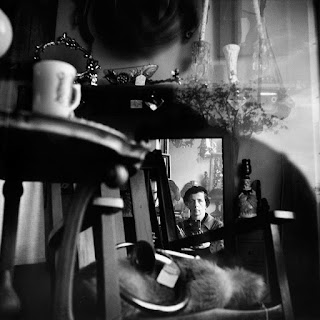 Vivian Maier (February 1, 1926 – April 21, 2009) was an American street photographer born in New York City. Although born in the U.S., it was in France that Maier spent most of her youth. Maier returned to the U.S. in 1951 where she took up work as a nanny and care-giver for the rest of her life. In her leisure however, Maier had begun to venture into the art of photography. Consistently taking photos over the course of five decades, she would ultimately leave over 100,000 negatives, most of them shot in Chicago and New York City. Vivian would further indulge in her passionate devotion to documenting the world around her through homemade films, recordings and collections, assembling one of the most fascinating windows into American life in the second half of the twentieth century.

Posted by Laura Mongiovi at 8:58 AM No comments: 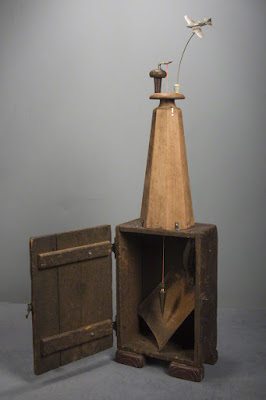 Wing Man,” with a column topped by an airplane atop the box, is something of a self-portrait, rooted in the notion that a TV producer works behind the scenes helping others. It's anchored by a shovel that had belonged to his grandfather.

“During the past 15 years since I last exhibited a significant amount of this type of work, I’ve been using these old wooden boxes and objects as arenas in which to confront the complex emotions, self-judgments, remorseful thoughts, tender moments, hopes for the future and grief over a life that no longer is and yet continues and evolves into something new and unknown as long as breath remains."

Link here to read more about this artist.
Posted by Laura Mongiovi at 8:37 AM No comments:

Pedro Hidalgo, a Cuban blind photographer uses still objects used in daily life to narrate the story of his life. 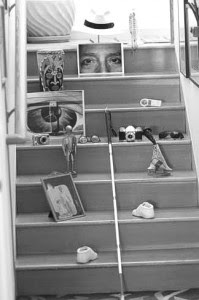 “The shoe at the bottom going all the way up to the top of the head with the hat is a representation of my life. I have the self-portrait moving up the stairs, which for me is symbolic of growth. The self-portrait begins at childhood and moving up from the bottom are small baby shoes. This represents my childhood growing up in Cuba as I did. Always had my visual disability from birth, and as you move up the stairs you see all the different objects, the cameras, the glasses, magnifying glass that have been crucial in my life and my growth. Cameras have always been a way for me to see. It has always helped me to view the world and to be able to capture the world so I could see it better. The drum and the music, the cigar-smoking figurine there indicates the culture that I come from, from Cuba. I grew up during the Cuban Revolution and this was a difficult time there. The photograph of the eyeball signifies war, as you see inside there is a soldier, the saint with the rosary beads signifies my background also, but also talks about the meaning of spirituality for me today. It has been an integral part of my growth as a person and as an artist.”


Source is blind with camera school
Posted by Laura Mongiovi at 8:28 AM No comments: 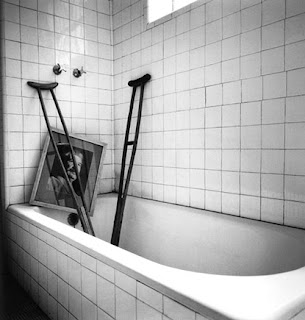 Posted by Laura Mongiovi at 8:07 AM No comments: 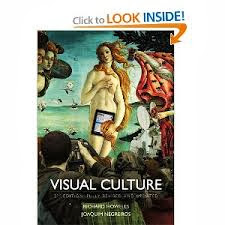 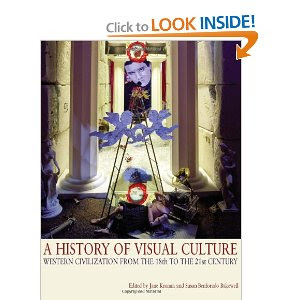 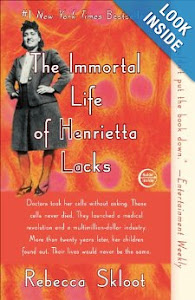 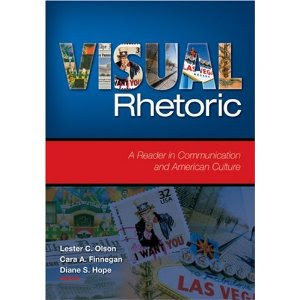